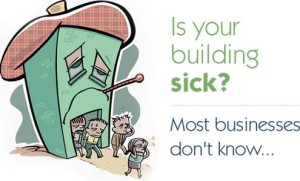 Last month, we discussed the implications of indoor air quality (IAQ). We asked why you should care, and came up with a number of answers focused on health. If that weren’t reason enough, there is another reason that IAQ should be of particular interest to business owners: employee productivity.

A number of credible studies have shown that indoor air quality can have a significant effect on employee productivity. And we’re not just talking about air that’s so bad that you can’t see or breathe. Generally speaking,OSHA takes cares of those (though I could tell you a story about an agricultural processing job I once worked in Arkansas). What we’re talking about here is much more subtle than that.

For example, a series of laboratory studies at Lawrence Berkeley Laboratory (LBL) examined typing speed and accuracy, as well as addition and proofreading error rate, with and without a section of 20-year-old carpet present in the room. The carpet, which was known to emit volatile organic compounds (VOCs), was hidden from the subjects. (VOC s are used and produced in the manufacture of paints, adhesives, petroleum products, pharmaceuticals, dry cleaning agents and refrigerants.) Results found a 4 percent improvement in speed and accuracy when the carpet was absent. The amount of ventilation used also had a significant impact. Results above were achieved with 20 cubic feet per minute (CFM) per person being blown into the room. Dropping that down to 6 CFM per person led to an additional 4 percent decrease in performance. Increasing the ventilation to 60 CFM per person achieved the same result as removing the carpet.

Another study found the presence of CRT monitors led to a 16 percent increase in typing error rate. A similar study found a 10 percent improvement in call center talk times when additional fresh air ventilation was provided. In many of these studies, the inhabitants made no complaints and were unaware of any issue with respect to the air quality.

Another extensive study performed at the Technical University of Denmark had similar results: A series of 8-week-long intervention experiments in call centers found performance improvements in the 6 to 9 percent range. While these numbers may not seem particularly high, they could be achieved at relatively low cost, or, in the case of new facility construction, built-in at the outset.

When you consider the fact that 90 percent of the total operating cost of a commercial office building goes into the salaries of the people working inside it, a simple change like improving the ventilation can yield substantial dividends. A Swedish study found that a 1 percent improvement in employee productivity was enough to offset the increased cost of proper ventilation.

Finally, a paper prepared by the Environmental Protection Agency makes a case for IAQ management in schools: The agency cites not only health impacts, particularly asthma, but also academic improvements. One cited study found that students in classrooms with higher ventilation rates scored as much as 14 to 15 percent higher on standardized tests than those in rooms with less ventilation.

UL Environment has developed a number of new test methodologies for indoor air quality. The company also released a study on the impact of paint on school air. In that report, researchers found that half of the nation’s 115,000 schools have issues with indoor air quality. Focusing initially on paints, they evaluated various paints — both those that emit low VOCs, as well as others designed to pull VOCs out of the air. The study identified paints of both types that were effective in reducing VOCs in the classroom, particularly in the days and weeks after application, which is when the problem was most prevalent.

We’re just beginning to understand some of the impacts of air quality on our health, wellness and ability to perform tasks. The picture that is now emerging shows us that we need to be concerned about air quality, indoor and out, and that we can improve that air quality by understanding the impact that man-made processes and products can have on our air.

Get a Free Estimate

Air Duct Cleaning
After a while, your heating and cooling system’s air ducts can get clogged with excessive amounts of dust and debris that are released into the home, and they can get also get infested with rodents or insects. Find out more about our air duct cleaning service

Get FREE dryer vent cleaning with a whole house air duct cleaning service at standard rate. Can not be combined with flat rate or other offers.
Call us for details

Don’t fall for cheap Air Duct Cleaning & Dryer Vent Cleaning. Remember, you get what you pay for.  According to the Better Business Bureau, it’s a scam called a “bait and switch,” and the BBB says it’s happening all across the country. Read more

Get the latest specials and promotions from memorable air care in your inbox!